King James Version (KJV)
For so hath the Lord commanded us, saying, I have set thee to be a light of the Gentiles, that thou shouldest be for salvation unto the ends of the earth.
Adam Clarke
Bible Commentary

For so the Lord commanded us - The apostles could quote a pertinent scripture for every thing they did; because the outlines of the whole Gospel dispensation are founded in the law and the prophets; and they were now building the Church of God according to the pattern shown them in the Mount. In the things of God, no man nor minister should go farther than he can say, Thus it is written, and thus it behoves me to do; and let him see that his quotations are fairly made, and not a detached passage or member of a sentence produced, because it seems to look like the system he wishes to establish.

I have set thee to be a light of the Gentiles - This quotation is from Isaiah 49:6, and was most fully in point. The Jews could not resist the testimony of their own prophet; and the Gentiles rejoiced to find that the offers of salvation were to be made so specifically to them.

For salvation unto the ends of the earth - The very name of the Messiah, viz Jesus, announced the design and end of his mission. He is the Savior, and is to be proclaimed as such to the ends of the earth; to all mankind; to every nation, and people, and tongue; and, wherever the Gospel is preached, there is a free, full, and sincere offer of salvation to every soul that hears it. And the offer is proof sufficient, in itself, that there is a power to receive its blessings given to those to whom the offer is made; as it would be of no use to offer them a salvation which it was designed they either should not or could not receive. A son of Satan might be capable of such dissimulation and bad faith; but the holy God cannot.

For salvation - To save sinners.

Unto the ends of the earth - To all lands; in all nations. See the notes on Acts 1:8.

Was this helpful?
Matthew Henry
Concise Bible Commentary
The Jews opposed the doctrine the apostles preached; and when they could find no objection, they blasphemed Christ and his gospel. Commonly those who begin with contradicting, end with blaspheming. But when adversaries of Christ's cause are daring, its advocates should be the bolder. And while many judge themselves unworthy of eternal life, others, who appear less likely, desire to hear more of the glad tidings of salvation. This is according to what was foretold in the Old Testament. What light, what power, what a treasure does this gospel bring with it! How excellent are its truths, its precepts, its promises! Those came to Christ whom the Father drew, and to whom the Spirit made the gospel call effectual, Ro 8:30. As many as were disposed to eternal life, as many as had concern about their eternal state, and aimed to make sure of eternal life, believed in Christ, in whom God has treasured up that life, and who is the only Way to it; and it was the grace of God that wrought it in them. It is good to see honourable women devout; the less they have to do in the world, the more they should do for their own souls, and the souls of others: but it is sad, when, under colour of devotion to God, they try to show hatred to Christ. And the more we relish the comforts and encouragements we meet with in the power of godliness, and the fuller our hearts are of them, the better prepared we are to face difficulties in the profession of godliness.
Was this helpful?
SDA Bible Commentary (limited)
Volume 1-7

47. I have set thee. A quotation from Isa. 49:6. There it may be understood as referring, first, to Israel, and prophetically, to Christ (see on Isa. 41:8; 49:6). Apparently a Messianic application of this passage was made by the Jews during the intertestamental period, for the apocryphal Book of Enoch (ch. 48:4) declares that the Messiah “shall be the light of the Gentiles.” Shortly after the birth of Jesus the aged Simeon applied this prophecy directly to Him, declaring that He would be “a light to lighten the Gentiles” (Luke 2:32). In the present instance Paul and Barnabas take a prophecy originally intended for Israel, the fulfillment of which Christ had initiated, and apply it to the Christian church in general and to themselves in particular. To them now was committed the responsibility of bringing the good news of salvation to the worldâ€”a responsibility the Jews had failed to fulfill.

Was this helpful?
Ellen G. White
The Great Controversy, 315

Oh, what a lesson is this wonderful story of Bethlehem! How it rebukes our unbelief, our pride and self-sufficiency. How it warns us to beware, lest by our criminal indifference we also fail to discern the signs of the times, and therefore know not the day of our visitation. GC 315.1

It was not alone upon the hills of Judea, not among the lowly shepherds only, that angels found the watchers for Messiah's coming. In the land of the heathen also were those that looked for Him; they were wise men, rich and noble, the philosophers of the East. Students of nature, the Magi had seen God in His handiwork. From the Hebrew Scriptures they had learned of the Star to arise out of Jacob, and with eager desire they awaited His coming, who should be not only the “Consolation of Israel,” but a “Light to lighten the Gentiles,” and “for salvation unto the ends of the earth.” Luke 2:25, 32; Acts 13:47. They were seekers for light, and light from the throne of God illumined the path for their feet. While the priests and rabbis of Jerusalem, the appointed guardians and expounders of the truth, were shrouded in darkness, the Heaven-sent star guided these Gentile strangers to the birthplace of the newborn King. GC 315.2

It is “unto them that look for Him” that Christ is to “appear the second time without sin unto salvation.” Hebrews 9:28. Like the tidings of the Saviour's birth, the message of the second advent was not committed to the religious leaders of the people. They had failed to preserve their connection with God, and had refused light from heaven; therefore they were not of the number described by the apostle Paul: “But ye, brethren, are not in darkness, that that day should overtake you as a thief. Ye are all the children of light, and the children of the day: we are not of the night, nor of darkness.” 1 Thessalonians 5:4, 5. GC 315.3

The watchmen upon the walls of Zion should have been the first to catch the tidings of the Saviour's advent, the first to lift their voices to proclaim Him near, the first to warn the people to prepare for His coming. But they were at ease, dreaming of peace and safety, while the people were asleep in their sins. Jesus saw His church, like the barren fig tree, covered with pretentious leaves, yet destitute of precious fruit. There was a boastful observance of the forms of religion, while the spirit of true humility, penitence, and faith—which alone could render the service acceptable to God—was lacking. Instead of the graces of the Spirit there were manifested pride, formalism, vainglory, selfishness, oppression. A backsliding church closed their eyes to the signs of the times. God did not forsake them, or suffer His faithfulness to fail; but they departed from Him, and separated themselves from His love. As they refused to comply with the conditions, His promises were not fulfilled to them. GC 315.4

For so hath the Lord commanded us, saying, I have set thee to be a light of the Gentiles, that thou shouldest be for salvation unto the ends of the earth. Acts 13:47. RC 236.1

He attracted attention to purity of life, to humility of spirit, and to devotion to God and His cause without hope of worldly honor or reward. He must divest religion of the narrow, conceited formalism which made it a burden and a reproach. He must present a complete, harmonious salvation to all. The narrow bounds of national exclusiveness must be overthrown, for His salvation was to reach the ends of the earth. He rejoiced in spirit as He beheld the poor of this world eagerly accepting the precious message which He brought. He looked up to heaven and said, “I thank thee, O Father, Lord of heaven and earth, because thou hast hid these things from the wise and prudent, and hast revealed them unto babes” (Matthew 11:25).... TMK 50.4

Read in context »
Was this helpful?
Ellen G. White
The Acts of the Apostles, 170-6

This desertion caused Paul to judge Mark unfavorably, and even severely, for a time. Barnabas, on the other hand, was inclined to excuse him because of his inexperience. He felt anxious that Mark should not abandon the ministry, for he saw in him qualifications that would fit him to be a useful worker for Christ. In after years his solicitude in Mark's behalf was richly rewarded, for the young man gave himself unreservedly to the Lord and to the work of proclaiming the gospel message in difficult fields. Under the blessing of God, and the wise training of Barnabas, he developed into a valuable worker. AA 170.1

Paul was afterward reconciled to Mark and received him as a fellow laborer. He also recommended him to the Colossians as one who was a fellow worker “unto the kingdom of God,” and “a comfort unto me.” Colossians 4:11. Again, not long before his own death, he spoke of Mark as “profitable” to him “for the ministry.” 2 Timothy 4:11. AA 170.2

After the departure of Mark, Paul and Barnabas visited Antioch in Pisidia and on the Sabbath day went into the Jewish synagogue and sat down. “After the reading of the law and the prophets the rulers of the synagogue sent unto them, saying, Ye men and brethren, if ye have any word of exhortation for the people, say on.” Being thus invited to speak, “Paul stood up, and beckoning with his hand said, Men of Israel, and ye that fear God, give audience.” Then followed a wonderful discourse. He proceeded to give a history of the manner in which the Lord had dealt with the Jews from the time of their deliverance from Egyptian bondage, and how a Saviour had been promised, of the seed of David, and he boldly declared that “of this man's seed hath God according to His promise raised unto Israel a Saviour, Jesus: when John had first preached before His coming the baptism of repentance to all the people of Israel. And as John fulfilled his course, he said, Whom think ye that I am? I am not He. But, behold, there cometh One after me, whose shoes of His feet I am not worthy to loose.” Thus with power he preached Jesus as the Saviour of men, the Messiah of prophecy. AA 170.3

The First Missionary Journey of Paul 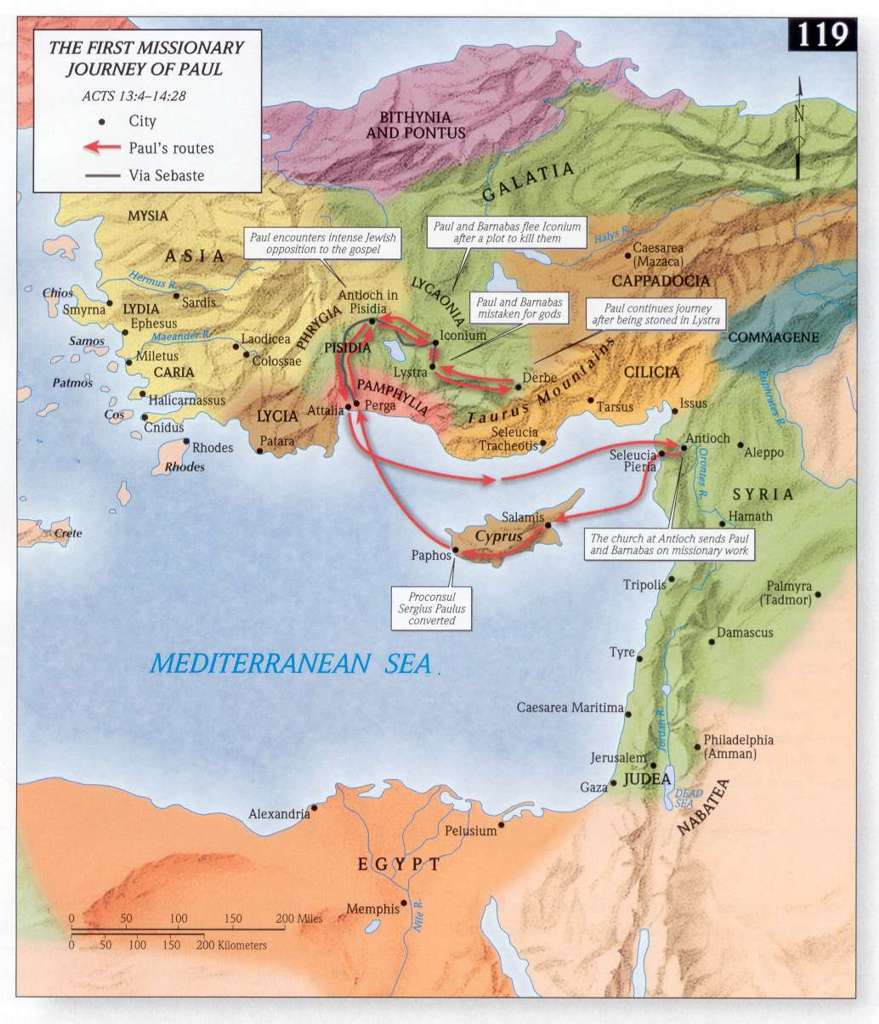