King James Version (KJV)
And he said unto me, Depart: for I will send thee far hence unto the Gentiles.
Adam Clarke
Bible Commentary

I will send thee far hence unto the Gentiles - This was the particular appointment of St. Paul: he was the apostle of the Gentiles; for, though he preached frequently to the Jews, yet to preach the Gospel to the Gentiles, and to write for the conversion and establishment of the Gentile world, were his peculiar destination. Hence we find him and his companions travelling every where; through Judea, Phoenicia, Arabia, Syria, Cilicia, Pisidia, Lycaonia, Pamphylia, Galatia, Phrygia, Macedonia, Greece, Asia, the Isles of the Mediterranean Sea, the Isles of the Aegean Sea, Italy, and some add Spain and even Britain. This was the diocess of this primitive bishop: none of the apostles traveled, none preached, none labored as this man; and, we may add, none was so greatly owned of God. The epistles of Peter, John, James, and Jude, are great and excellent; but, when compared with those of Paul, however glorious they may be, they have no glory comparatively, by reason of that glory which excelleth. Next to Jesus Christ, St. Paul is the glory of the Christian Church. Jesus is the foundation; Paul, the master-builder.

And he said unto me, Depart - Because the Christians at Jerusalem would not receive him.

Far hence - Paul traveled far in the pagan nations. A large part of his ministry was spent in remote countries, and in the most distant regions then known. See Romans 15:19.

Was this helpful?
Matthew Henry
Concise Bible Commentary
The apostle goes on to relate how he was confirmed in the change he had made. The Lord having chosen the sinner, that he should know his will, he is humbled, enlightened, and brought to the knowledge of Christ and his blessed gospel. Christ is here called that Just One; for he is Jesus Christ the righteous. Those whom God has chosen to know his will, must look to Jesus, for by him God has made known his good-will to us. The great gospel privilege, sealed to us by baptism, is the pardon of sins. Be baptized, and wash away thy sins; that is, receive the comfort of the pardon of thy sins in and through Jesus Christ, and lay hold on his righteousness for that purpose; and receive power against sin, for the mortifying of thy corruptions. Be baptized, and rest not in the sign, but make sure of the thing signified, the putting away of the filth of sin. The great gospel duty, to which by our baptism we are bound, is, to seek for the pardon of our sins in Christ's name, and in dependence on him and his righteousness. God appoints his labourers their day and their place, and it is fit they should follow his appointment, though it may cross their own will. Providence contrives better for us than we do for ourselves; we must refer ourselves to God's guidance. If Christ send any one, his Spirit shall go along with him, and give him to see the fruit of his labours. But nothing can reconcile man's heart to the gospel, except the special grace of God.
Was this helpful?
SDA Bible Commentary (limited)
Volume 1-7

21. I will send. Paul’s departure from Jerusalem was not the fulfillment of this declaration of the divine purpose for Paul. Some seven years were yet to pass before Paul and Barnabas set out on their First Missionary Journey (see pp. 29, 100, 102).

Was this helpful?
Ellen G. White
The Acts of the Apostles, 159

Paul's labors at Antioch, in association with Barnabas, strengthened him in his conviction that the Lord had called him to do a special work for the Gentile world. At the time of Paul's conversion, the Lord had declared that he was to be made a minister to the Gentiles, “to open their eyes, and to turn them from darkness to light, and from the power of Satan unto God, that they may receive forgiveness of sins, and inheritance among them which are sanctified by faith that is in Me.” Acts 26:18. The angel that appeared to Ananias had said of Paul, “He is a chosen vessel unto Me, to bear My name before the Gentiles, and kings, and the children of Israel.” Acts 9:15. And Paul himself, later in his Christian experience, while praying in the temple at Jerusalem, had been visited by an angel from heaven, who bade him, “Depart: for I will send thee far hence unto the Gentiles.” Acts 22:21. AA 159.1

Thus the Lord had given Paul his commission to enter the broad missionary field of the Gentile world. To prepare him for this extensive and difficult work, God had brought him into close connection with Himself and had opened before his enraptured vision views of the beauty and glory of heaven. To him had been given the ministry of making known “the mystery” which had been “kept secret since the world began” (Romans 16:25),—“the mystery of His will” (Ephesians 1:9), “which in other ages was not made known unto the sons of men, as it is now revealed unto His holy apostles and prophets by the Spirit; that the Gentiles should be fellow heirs, and of the same body, and partakers of His promise in Christ by the gospel: whereof,” declares Paul, “I was made a minister.... Unto me, who am less than the least of all saints, is this grace given, that I should preach among the Gentiles the unsearchable riches of Christ; and to make all men see what is the fellowship of the mystery, which from the beginning of the world hath been hid in God, who created all things by Jesus Christ: to the intent that now unto the principalities and powers in heavenly places might be known by the church the manifold wisdom of God, according to the eternal purpose which He purposed in Christ Jesus our Lord.” Ephesians 3:5-11. AA 159.2

God had abundantly blessed the labors of Paul and Barnabas during the year they remained with the believers in Antioch. But neither of them had as yet been formally ordained to the gospel ministry. They had now reached a point in their Christian experience when God was about to entrust them with the carrying forward of a difficult missionary enterprise, in the prosecution of which they would need every advantage that could be obtained through the agency of the church. AA 160.1

Read in context »
Was this helpful?
Ellen G. White
The Acts of the Apostles, 233

Thus persecution followed the teachers of truth from city to city. The enemies of Christ could not prevent the advancement of the gospel, but they succeeded in making the work of the apostles exceedingly hard. Yet in the face of opposition and conflict, Paul pressed steadily forward, determined to carry out the purpose of God as revealed to him in the vision at Jerusalem: “I will send thee far hence unto the Gentiles.” Acts 22:21. AA 233.1

Paul's hasty departure from Berea deprived him of the opportunity he had anticipated of visiting the brethren at Thessalonica. AA 233.2

On arriving at Athens, the apostle sent the Berean brethren back with a message to Silas and Timothy to join him immediately. Timothy had come to Berea prior to Paul's departure, and with Silas had remained to carry on the work so well begun there, and to instruct the new converts in the principles of the faith. AA 233.3

“The sower went forth to sow” (R.V.). In the East the state of affairs was so unsettled, and there was so great danger from violence that the people dwelt chiefly in walled towns, and the husbandmen went forth daily to their labor outside the walls. So Christ, the heavenly Sower, went forth to sow. He left His home of security and peace, left the glory that He had with the Father before the world was, left His position upon the throne of the universe. He went forth, a suffering, tempted man; went forth in solitude, to sow in tears, to water with His blood, the seed of life for a world lost. COL 36.1

His servants in like manner must go forth to sow. When called to become a sower of the seed of truth, Abraham was bidden, “Get thee out of thy country, and from thy kindred, and from thy father's house, unto a land that I will show thee.” Genesis 12:1. “And he went out, not knowing whither he went.” Hebrews 11:8. So to the apostle Paul, praying in the temple at Jerusalem, came the message from God, “Depart; for I will send thee far hence unto the Gentiles.” Acts 22:21. So those who are called to unite with Christ must leave all, in order to follow Him. Old associations must be broken up, plans of life relinquished, earthly hopes surrendered. In toil and tears, in solitude, and through sacrifice, must the seed be sown. COL 36.2

After Paul's conversion, he visited Jerusalem and there preached Jesus and the wonders of His grace. He related his miraculous conversion, which so enraged the priests and rulers that they sought to take his life. But that he might be saved, Jesus again appeared to him in a vision while he was praying, and said unto him, “Get thee quickly out of Jerusalem: for they will not receive thy testimony concerning Me.” Paul answered, “Lord, they know that I imprisoned and beat in every synagogue them that believed on Thee: and when the blood of Thy martyr Stephen was shed, I also was standing by, and consenting unto his death, and kept the raiment of them that slew him.” Paul thought that the Jews in Jerusalem could not resist his testimony; that they would consider that the great change in him could be wrought only by the power of God. But the reply was more decided than before: “Depart: for I will send thee far hence unto the Gentiles.” EW 206.1

During Paul's absence from Jerusalem, he wrote many letters to different places, relating his experience and bearing a powerful testimony. But some strove to destroy the influence of those letters. They were forced to admit that his letters were weighty and powerful, but they declared that his bodily presence was weak and his speech contemptible. EW 206.2 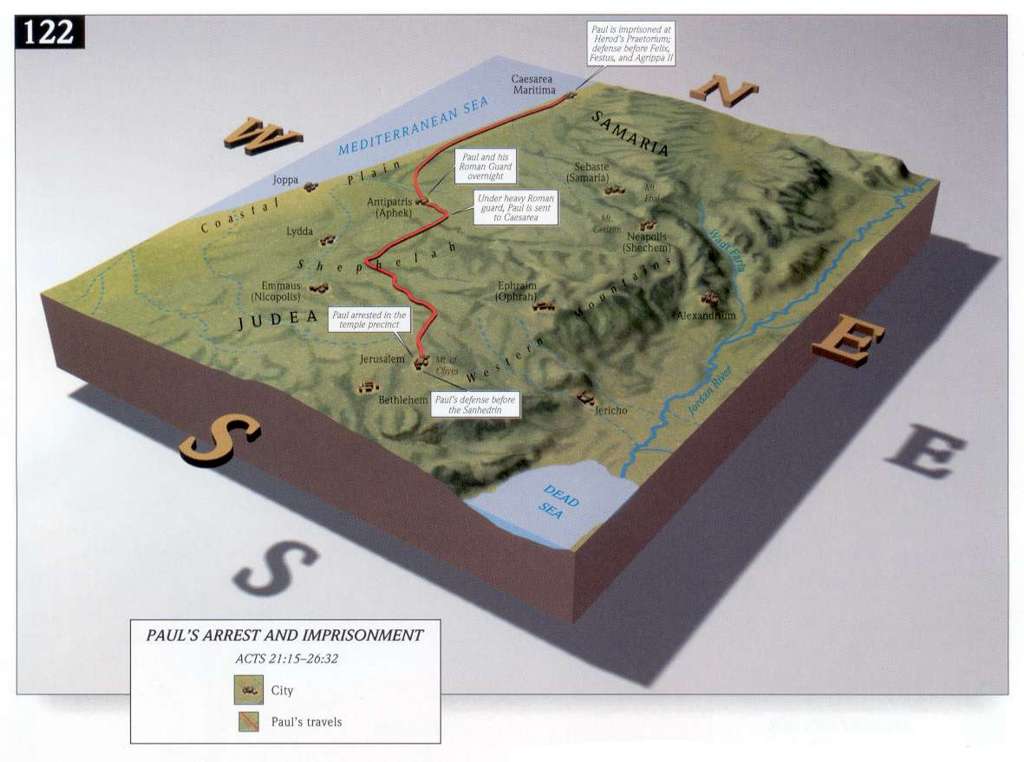