King James Version (KJV)
So when the Samaritans were come unto him, they besought him that he would tarry with them: and he abode there two days.
Albert Barnes
Notes on the Whole Bible
Verses 39-42

And many of the Samaritans of that city believed on him, … - There is seldom an instance of so remarkable success as this. From a single conversation, in circumstances, in a place, and with an individual little likely to be attended with such results, many sinners were converted; many believed on the testimony of the woman; many more came to hear, and believed because they heard him themselves. We should never despair of doing good in the most unpromising circumstances, and we should seize upon every opportunity to converse with sinners on the great subject of their souls‘ salvation.

Was this helpful?
Matthew Henry
Concise Bible Commentary
The disciples wondered that Christ talked thus with a Samaritan. Yet they knew it was for some good reason, and for some good end. Thus when particular difficulties occur in the word and providence of God, it is good to satisfy ourselves that all is well that Jesus Christ says and does. Two things affected the woman. The extent of his knowledge. Christ knows all the thoughts, words, and actions, of all the children of men. And the power of his word. He told her secret sins with power. She fastened upon that part of Christ's discourse, many would think she would have been most shy of repeating; but the knowledge of Christ, into which we are led by conviction of sin, is most likely to be sound and saving. They came to him: those who would know Christ, must meet him where he records his name. Our Master has left us an example, that we may learn to do the will of God as he did; with diligence, as those that make a business of it; with delight and pleasure in it. Christ compares his work to harvest-work. The harvest is appointed and looked for before it comes; so was the gospel. Harvest-time is busy time; all must be then at work. Harvest-time is a short time, and harvest-work must be done then, or not at all; so the time of the gospel is a season, which if once past, cannot be recalled. God sometimes uses very weak and unlikely instruments for beginning and carrying on a good work. Our Saviour, by teaching one poor woman, spread knowledge to a whole town. Blessed are those who are not offended at Christ. Those taught of God, are truly desirous to learn more. It adds much to the praise of our love to Christ and his word, if it conquers prejudices. Their faith grew. In the matter of it: they believed him to be the Saviour, not only of the Jews but of the world. In the certainty of it: we know that this is indeed the Christ. And in the ground of it, for we have heard him ourselves.
Was this helpful?
SDA Bible Commentary (limited)
Volume 1-7

He abode there two days - We are not told that he wrought any miracles among them; this does not appear to have been necessary: they were a simple-hearted, teachable people, and they credited him on the evidence of his own eternal truth. Why are not miracles wrought now? Miracles were only for the establishment of the doctrines of Christianity, where they were first preached; we profess to believe these doctrines; therefore, to us, miracles would be useless. Where the doctrine is credited, no miracle is necessary: the Samaritans believed, and no miracle was wrought among them; for the simple reason, it was not necessary.

Those who have been most successful in soul-winning were men and women who did not pride themselves on their ability, but who in humility and faith sought to help those about them. Jesus did this very work. He came close to those whom He desired to reach. How often, with a few gathered about Him, He gave His lessons, and one by one the passers-by paused to listen, until a great multitude heard with wonder and awe the words of the heaven-sent Teacher. GW 194.1

On the way to Galilee Jesus passed through Samaria. It was noon when He reached the beautiful Vale of Shechem. At the opening of this valley was Jacob's well. Wearied with His journey, He sat down here to rest while His disciples went to buy food. DA 183.1

Read in context »
Was this helpful?
Ellen G. White
The Desire of Ages, 402

This was the only miracle that Jesus wrought while on this journey. It was for the performance of this act that He went to the borders of Tyre and Sidon. He wished to relieve the afflicted woman, and at the same time to leave an example in His work of mercy toward one of a despised people for the benefit of His disciples when He should no longer be with them. He wished to lead them from their Jewish exclusiveness to be interested in working for others besides their own people. DA 402.1

Jesus longed to unfold the deep mysteries of the truth which had been hid for ages, that the Gentiles should be fellow heirs with the Jews, and “partakers of His promise in Christ by the gospel.” Ephesians 3:6. This truth the disciples were slow to learn, and the divine Teacher gave them lesson upon lesson. In rewarding the faith of the centurion at Capernaum, and preaching the gospel to the inhabitants of Sychar, He had already given evidence that He did not share the intolerance of the Jews. But the Samaritans had some knowledge of God; and the centurion had shown kindness to Israel. Now Jesus brought the disciples in contact with a heathen, whom they regarded as having no reason above any of her people, to expect favor from Him. He would give an example of how such a one should be treated. The disciples had thought that He dispensed too freely the gifts of His grace. He would show that His love was not to be circumscribed to race or nation. DA 402.2

When He said, “I am not sent but unto the lost sheep of the house of Israel,” He stated the truth, and in His work for the Canaanite woman He was fulfilling His commission. This woman was one of the lost sheep that Israel should have rescued. It was their appointed work, the work which they had neglected, that Christ was doing. DA 402.3

Read in context »
Was this helpful?
Ellen G. White
The Desire of Ages, 488

Every human being, in body, soul, and spirit, is the property of God. Christ died to redeem all. Nothing can be more offensive to God than for men, through religious bigotry, to bring suffering upon those who are the purchase of the Saviour's blood. DA 488.1

“And He arose from thence, and cometh into the coasts of Judea by the farther side of Jordan: and the people resort unto Him again; and, as He was wont, He taught them again.” Mark 10:1. DA 488.2

A considerable part of the closing months of Christ's ministry was spent in Perea, the province on “the farther side of Jordan” from Judea. Here the multitude thronged His steps, as in His early ministry in Galilee, and much of His former teaching was repeated. DA 488.3

Jesus' Journeys from Galilee to Judea 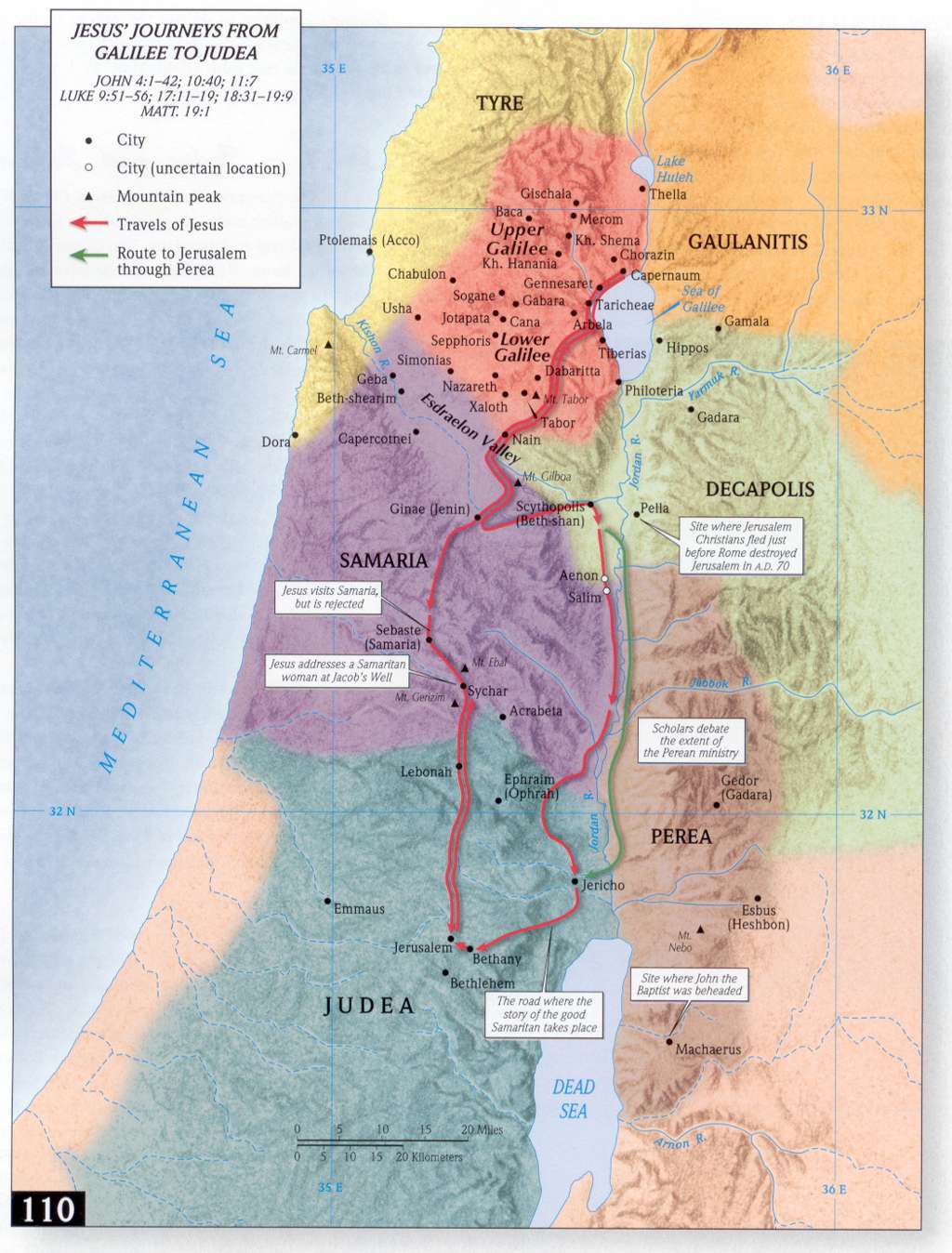