King James Version (KJV)
Then he called for a light, and sprang in, and came trembling, and fell down before Paul and Silas,
Adam Clarke
Bible Commentary

He called for a light - That he might see how things stood, and whether the words of Paul were true; for on this his personal safety depended.

Came trembling - Terrified by the earthquake, and feeling the danger to which his own life was exposed.

Fell down before Paul and Silas - The persons whom a few hours before he, according to his office, treated with so much asperity, if not cruelty, as some have supposed; though, by the way, it does not appear that he exceeded his orders in his treatment of the apostles.

Then he called for a light - Greek: lights, in the plural. Probably several torches were brought by his attendants.

And came trembling - Alarmed at the earthquake; amazed that the prisoners were still there; confounded at the calmness of Paul and Silas and overwhelmed at the proof of the presence of God. Compare Jeremiah 5:22, “Fear ye not me, saith the Lord? will ye not tremble at my presence? etc.”

And fell down - This was an act of profound reverence. See the notes on Matthew 2:11. It is evident that he regarded them as the favorites of God, and was con strained to recognize them as religious teachers.

Was this helpful?
Matthew Henry
Concise Bible Commentary
The consolations of God to his suffering servants are neither few nor small. How much more happy are true Christians than their prosperous enemies! As in the dark, so out of the depths, we may cry unto God. No place, no time is amiss for prayer, if the heart be lifted up to God. No trouble, however grievous, should hinder us from praise. Christianity proves itself to be of God, in that it obliges us to be just to our own lives. Paul cried aloud to make the jailer hear, and to make him heed, saying, Do thyself no harm. All the cautions of the word of God against sin, and all appearances of it, and approaches to it, have this tendency. Man, woman, do not ruin thyself; hurt not thyself, and then none else can hurt thee; do not sin, for nothing but that can hurt thee. Even as to the body, we are cautioned against the sins which do harm to that. Converting grace changes people's language of and to good people and good ministers. How serious the jailer's inquiry! His salvation becomes his great concern; that lies nearest his heart, which before was furthest from his thoughts. It is his own precious soul that he is concerned about. Those who are thoroughly convinced of sin, and truly concerned about their salvation, will give themselves up to Christ. Here is the sum of the whole gospel, the covenant of grace in a few words; Believe in the Lord Jesus Christ, and thou shalt be saved, and thy house. The Lord so blessed the word, that the jailer was at once softened and humbled. He treated them with kindness and compassion, and, professing faith in Christ, was baptized in that name, with his family. The Spirit of grace worked such a strong faith in them, as did away further doubt; and Paul and Silas knew by the Spirit, that a work of God was wrought in them. When sinners are thus converted, they will love and honour those whom they before despised and hated, and will seek to lessen the suffering they before desired to increase. When the fruits of faith begin to appear, terrors will be followed by confidence and joy in God.
Was this helpful?
Ellen G. White
The Acts of the Apostles, 211-20

Read in context »
Was this helpful?
Ellen G. White
The Acts of the Apostles, 213-7

Dispossessed of the evil spirit and restored to her right mind, the woman chose to become a follower of Christ. Then her masters were alarmed for their craft. They saw that all hope of receiving money from her divinations and soothsayings was at an end and that their source of income would soon be entirely cut off if the apostles were allowed to continue the work of the gospel. AA 213.1

Many others in the city were interested in gaining money through satanic delusions, and these, fearing the influence of a power that could so effectually stop their work, raised a mighty cry against the servants of God. They brought the apostles before the magistrates with the charge: “These men, being Jews, do exceedingly trouble our city, and teach customs, which are not lawful for us to receive, neither to observe, being Romans.” AA 213.2

Stirred by a frenzy of excitement, the multitude rose against the disciples. A mob spirit prevailed and was sanctioned by the authorities, who tore the outer garments from the apostles and commanded that they should be scourged. “And when they had laid many stripes upon them, they cast them into prison, charging the jailer to keep them safely: who, having received such a charge, thrust them into the inner prison, and made their feet fast in the stocks.” AA 213.3

Her masters were pleased that she cried after the disciples; but when the evil spirit left her, and they saw her a meek disciple of Christ, they were enraged. They had gathered much money by her fortunetelling, and now the hope of their gain was gone. Satan's object was defeated; but his servants caught Paul and Silas, and drew them into the market place, unto the rulers, and to the magistrates, saying, “These men, being Jews, do exceedingly trouble our city.” And the multitude rose up together against them, and the magistrates rent off their clothes, and commanded to beat them. And when they had laid many stripes upon them, they cast them into prison, charging the jailer to keep them safely, who, having received such a charge, thrust them into the inner prison and made their feet fast in the stocks. But the angels of the Lord accompanied them within the prison walls, and caused their imprisonment to tell to the glory of God, and show to the people that God was in the work, and with His chosen servants. EW 204.1

At midnight Paul and Silas prayed, and sang praises unto God, and suddenly there was a great earthquake, so that the foundations of the prison were shaken; and I saw that immediately the angel of God loosed everyone's bands. The keeper of the prison, upon awaking and seeing the prison doors open, was affrighted. He thought that the prisoners had escaped, and that he must be punished with death. But as he was about to kill himself, Paul cried with a loud voice, saying, “Do thyself no harm: for we are all here.” EW 204.2

The power of God there convicted the jailer. He called for a light, and springing in, came trembling and fell down before Paul and Silas, and brought them out, and said, “Sirs, what must I do to be saved?” And they said, “Believe on the Lord Jesus Christ, and thou shalt be saved, and thy house.” The keeper of the prison then assembled his whole household, and Paul preached unto them Jesus. Thus the jailer's heart was united to those of his brethren, and he washed their stripes, and he and all his house were baptized that night. He then set food before them, and rejoiced, believing in God with all his house. EW 205.1

Read in context »
Was this helpful?
Ellen G. White
Education, 66-7

The greatest of human teachers, Paul accepted the lowliest as well as the highest duties. He recognized the necessity of labor for the hand as well as for the mind, and he wrought at a handicraft for his own support. His trade of tent making he pursued while daily preaching the gospel in the great centers of civilization. “These hands,” he said, at parting with the elders of Ephesus, “have ministered unto my necessities, and to them that were with me.” Acts 20:34. Ed 66.1

While he possessed high intellectual endowments, the life of Paul revealed the power of a rarer wisdom. Principles of deepest import, principles concerning which the greatest minds of this time were ignorant, are unfolded in his teachings and exemplified in his life. He had that greatest of all wisdom, which gives quickness of insight and sympathy of heart, which brings man in touch with men, and enables him to arouse their better nature and inspire them to a higher life. Ed 66.2

Listen to his words before the heathen Lystrians, as he points them to God revealed in nature, the Source of all good, who “gave us rain from heaven, and fruitful seasons, filling our hearts with food and gladness.” Acts 14:17. Ed 66.3

Read in context »
Was this helpful?
Ellen G. White
The Acts of the Apostles, 426

But instead of permitting his convictions to lead him to repentance, he sought to dismiss these unwelcome reflections. The interview with Paul was cut short. “Go thy way for this time,” he said; “when I have a convenient season, I will call for thee.” AA 426.1

How wide the contrast between the course of Felix and that of the jailer of Philippi! The servants of the Lord were brought in bonds to the jailer, as was Paul to Felix. The evidence they gave of being sustained by a divine power, their rejoicing under suffering and disgrace, their fearlessness when the earth was reeling with the earthquake shock, and their spirit of Christlike forgiveness, sent conviction to the jailer's heart, and with trembling he confessed his sins and found pardon. Felix trembled, but he did not repent. The jailer joyfully welcomed the Spirit of God to his heart and to his home; Felix bade the divine Messenger depart. The one chose to become a child of God and an heir of heaven; the other cast his lot with the workers of iniquity. AA 426.2

For two years no further action was taken against Paul, yet he remained a prisoner. Felix visited him several times and listened attentively to his words. But the real motive for this apparent friendliness was a desire for gain, and he intimated that by the payment of a large sum of money Paul might secure his release. The apostle, however, was of too noble a nature to free himself by a bribe. He was not guilty of any crime, and he would not stoop to commit a wrong in order to gain freedom. Furthermore, he was himself too poor to pay such a ransom, had he been disposed to do so, and he would not, in his own behalf, appeal to the sympathy and generosity of his converts. He also felt that he was in the hands of God, and he would not interfere with the divine purposes respecting himself. AA 426.3 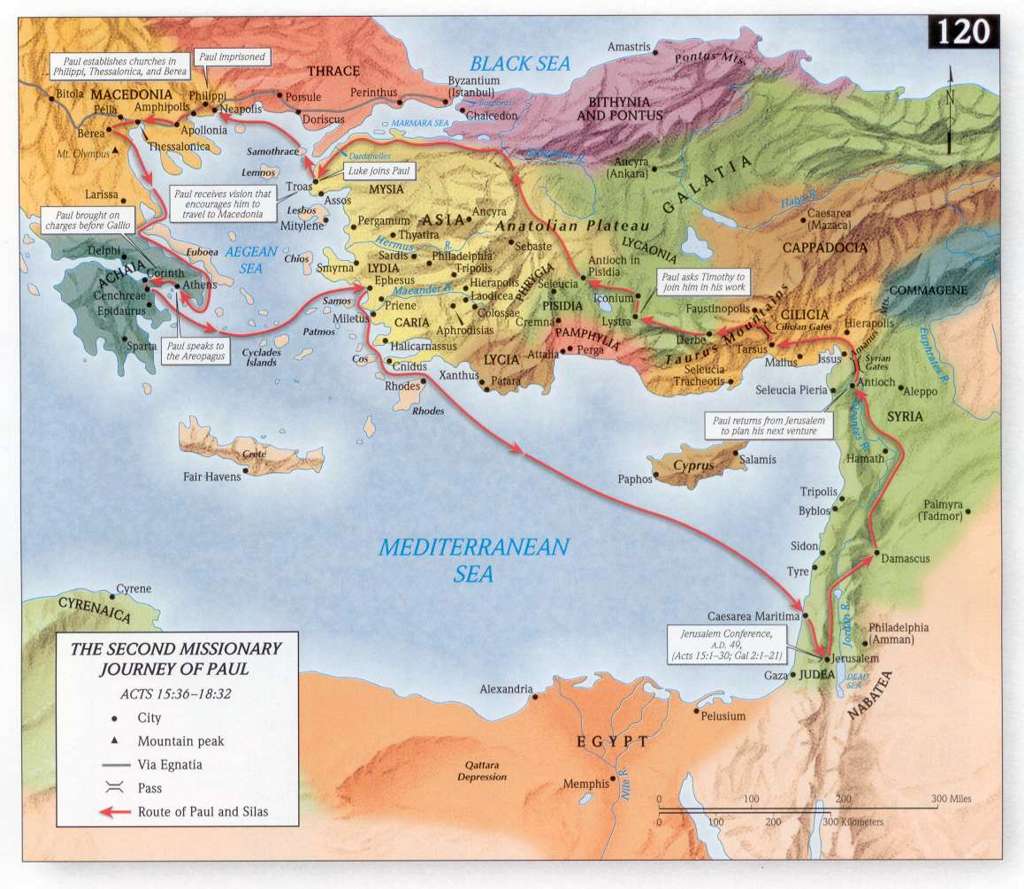