King James Version (KJV)
And the standard of the camp of the children of Dan set forward, which was the rereward of all the camps throughout their hosts: and over his host was Ahiezer the son of Ammishaddai.
Matthew Henry
Concise Bible Commentary
After the Israelites had continued nearly a year at mount Sinai, and all was settled respecting their future worship, they began their march to Canaan. True religion begins with the knowledge of the holy law of God, and humiliation for sin, but we must go on towards perfection, in acquaintance with Christ and his gospel, and those effectual encouragements, motives, and assistances to holiness, which it proposes. They took their journey according to the commandment of the Lord, De 1:6-8, and as the cloud led them. Those who give themselves to the direction of God's word and Spirit, steer a steady course, even when they seem bewildered. While they are sure they cannot lose their God and Guide, they need not fear losing their way. They went out of the wilderness of Sinai, and rested in the wilderness of Paran. All our removes in this world are but from one wilderness to another. The changes we think will be for the better do not always prove so. We shall never be at rest, never at home, till we come to heaven, but all will be well there.
Was this helpful?
SDA Bible Commentary (limited)
Volume 1-7

25. The rereward. That is, rearward, or rear guard, literally, “the collector.” Naphtali, part of the division under Dan, was actually in the very rear. The word is applied to God as protector in Isa. 52:12; 58:8.

Was this helpful?
Ellen G. White
Testimonies for the Church, vol. 1, 651

A special signal was first given by the trumpeters to call the attention of the people; then all were to be attentive and obey the certain sound of the trumpets. There was no confusion of sound in the voices of the trumpets, therefore there was no excuse for confusion in movements. The head officer of each company gave definite directions in regard to the movements they were required to make, and none who gave attention were left in ignorance of what they were to do. If any failed to comply with the requirements given by the Lord to Moses, and by Moses to the people, they were punished with death. It would be no excuse to plead that they knew not the nature of these requirements, for they would only prove themselves willingly ignorant, and would receive the just punishment for their transgression. If they did not know the will of God concerning them, it was their own fault. They had the same opportunities to obtain the knowledge imparted as others of the people had, therefore their sin of not knowing, not understanding, was as great in the sight of God as if they had heard and then transgressed. 1T 651.1

Read in context »
Was this helpful?
Ellen G. White
Patriarchs and Prophets, 375-7

To the Levites was committed the charge of the tabernacle and all that pertained thereto, both in the camp and on the journey. When the camp set forward they were to strike the sacred tent; when a halting place was reached they were to set it up. No person of another tribe was allowed to come near, on pain of death. The Levites were separated into three divisions, the descendants of the three sons of Levi, and each was assigned its special position and work. In front of the tabernacle, and nearest to it, were the tents of Moses and Aaron. On the south were the Kohathites, whose duty it was to care for the ark and the other furniture; on the north Merarites, who were placed in charge of the pillars, sockets, boards, etc.; in the rear the Gershonites, to whom the care of the curtains and hangings was committed. PP 375.1

The position of each tribe also was specified. Each was to march and to encamp beside its own standard, as the Lord had commanded: “Every man of the children of Israel shall pitch by his own standard, with the ensign of their father's house: far off about the tabernacle of the congregation shall they pitch.” “As they encamp, so shall they set forward, every man in his place by their standards.” Numbers 2:2, 17. The mixed multitude that had accompanied Israel from Egypt were not permitted to occupy the same quarters with the tribes, but were to abide upon the outskirts of the camp; and their offspring were to be excluded from the community until the third generation. Deuteronomy 23:7, 8. PP 375.2

Scrupulous cleanliness as well as strict order throughout the encampment and its environs was enjoined. Thorough sanitary regulations were enforced. Every person who was unclean from any cause was forbidden to enter the camp. These measures were indispensable to the preservation of health among so vast a multitude; and it was necessary also that perfect order and purity be maintained, that Israel might enjoy the presence of a holy God. Thus He declared: “The Lord thy God walketh in the midst of thy camp, to deliver thee, and to give up thine enemies before thee; therefore shall thy camp be holy.” PP 375.3

In all the journeyings of Israel, “the ark of the covenant of the Lord went before them, ... to search out a resting place for them.” Numbers 10:33. Borne by the sons of Kohath, the sacred chest containing God's holy law was to lead the van. Before it went Moses and Aaron; and the priests, bearing silver trumpets, were stationed near. These priests received directions from Moses, which they communicated to the people by the trumpets. It was the duty of the leaders of each company to give definite directions concerning all the movements to be made, as indicated by the trumpets. Whoever neglected to comply with the directions given was punished with death. PP 375.4 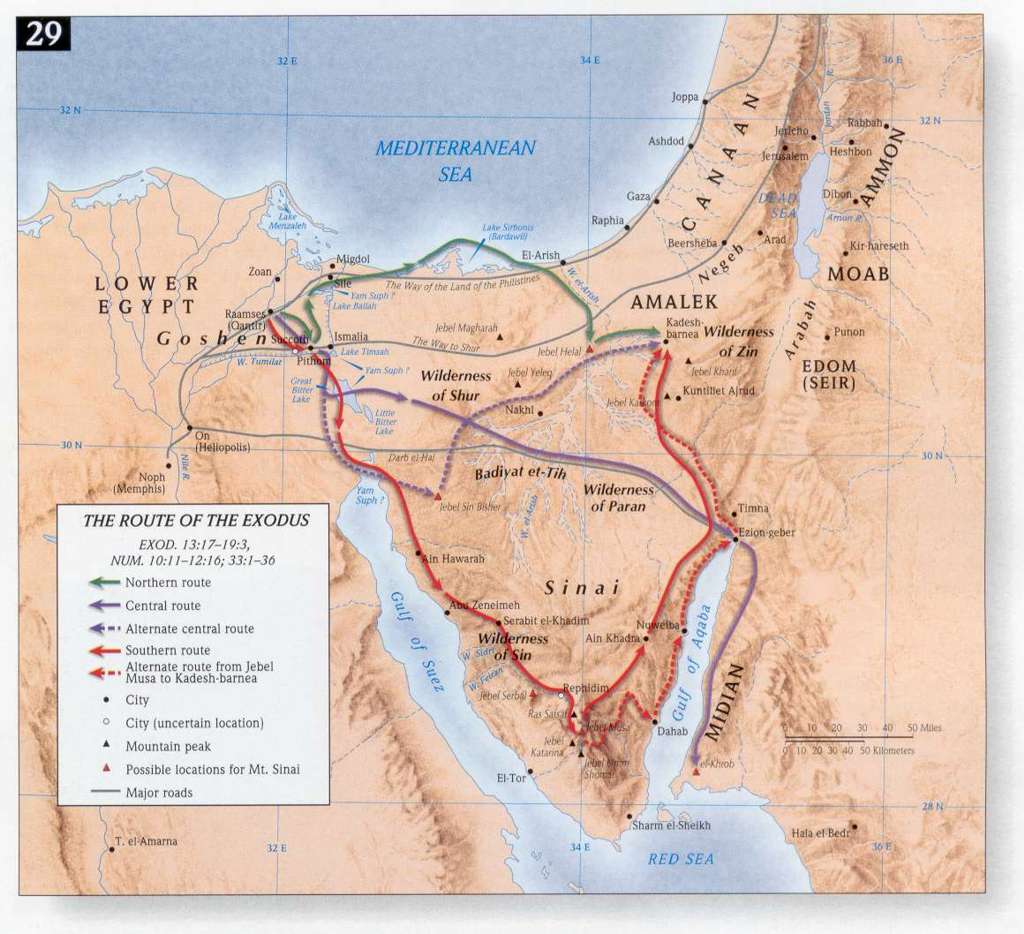