King James Version (KJV)
And to the Canaanite on the east and on the west, and to the Amorite, and the Hittite, and the Perizzite, and the Jebusite in the mountains, and to the Hivite under Hermon in the land of Mizpeh.
Adam Clarke
Bible Commentary

The Canaanite on the east, etc. - Those who dwelt on the borders of Jordan, south of the sea of Tiberias.

On the west - Those were the Phoenicians who dwelt on the coast of the Mediterranean Sea, from Dor northwards, on the way to Mount Libanus. - Calmet.

The Hivite under Hermon - Mount Hermon was to the east of Libanus and the fountains of Jordan; it is the same with Syrion and Baal Hermon in Scripture.

The land of Mizpeh - or Mizpah,” the land of the watch-tower” The locality is probably identified as a plain stretching at the foot of Hermon southwestward, from Hasbeya, toward the Bahr el Huleh. In a land abounding in striking points of view like Palestine, the name Mizpah was naturally, like “Belle Vue” among ourselves, bestowed on many places. The Mizpeh here mentioned must not be confounded with the Mizpeh of Gilead (Joshua 13:26, and Judges 11:29); nor with the Mizpeh of Judah Joshua 15:38; nor yet with that of Moab 1 Samuel 22:3.

Was this helpful?
Matthew Henry
Concise Bible Commentary
The wonders God wrought for the Israelites were to encourage them to act vigorously themselves. Thus the war against Satan's kingdom, carried on by preaching the gospel, was at first forwarded by miracles; but being fully proved to be of God, we are now left to the Divine grace in the usual course, in the use of the sword of the Spirit. God encouraged Joshua. Fresh dangers and difficulties make it necessary to seek fresh supports from the word of God, which we have nigh unto us for use in every time of need. God proportions our trials to our strength, and our strength to our trials. Joshua's obedience in destroying the horses and chariots, shows his self-denial in compliance with God's command. The possession of things on which the carnal heart is prone to depend, is hurtful to the life of faith, and the walk with God; therefore it is better to be without worldly advantages, than to have the soul endangered by them.
Was this helpful?
SDA Bible Commentary (limited)
Volume 1-7

3. The Canaanite. This expression describing the Canaanites as being to “the east” and to “the west” is somewhat ambiguous. The LXX reads, “and to the Chananites on the coast eastward, and to the Amorites on the coast.” There were probably Canaanite city-states in both directions. Jabin summons all of them, as well as the Amorites, Hittites, Perizzites, Jebusites, and Hivites.

Hivite under Hermon. In distinction from the other section of the same tribe at Gibeon, as has already been mentioned (ch. 9:3, 7).

Mizpeh. Literally, “watchtower.” Mizpeh was near Mt. Hermon, at the southern end of the Anti-Lebanon range and on the extreme northern boundary of Israel. It was probably situated west of the base of the mountains. Its location made it a desirable military watchpost.

Was this helpful?
Ellen G. White
Patriarchs and Prophets, 510-2

The victory at Beth-horon was speedily followed by the conquest of southern Canaan. “Joshua smote all the country of the hills, and of the south, and of the vale.... And all these kings and their land did Joshua take at one time, because the Lord God of Israel fought for Israel. And Joshua returned, and all Israel with him, unto the camp at Gilgal.” PP 510.1

The tribes of northern Palestine, terrified at the success which had attended the armies of Israel, now entered into a league against them. At the head of this confederacy was Jabin, king of Hazor, a territory to the west of Lake Merom. “And they went out, they and all their hosts with them.” This army was much larger than any that the Israelites had before encountered in Canaan—“much people, even as the sand that is upon the seashore in multitude, with horses and chariots very many. And when all these kings were met together, they came and pitched together at the waters of Merom, to fight against Israel.” Again a message of encouragement was given to Joshua: “Be not afraid because of them: for tomorrow about this time will I deliver them up all slain before Israel.” PP 510.2

Near Lake Merom he fell upon the camp of the allies and utterly routed their forces. “The Lord delivered them into the hand of Israel, who smote them, and chased them ... until they left them none remaining.” The chariots and horses that had been the pride and boast of the Canaanites were not to be appropriated by Israel. At the command of God the chariots were burned, and the horses lamed, and thus rendered unfit for use in battle. The Israelites were not to put their trust in chariots or horses, but “in the name of the Lord their God.” PP 510.3

One by one the cities were taken, and Hazor, the stronghold of the confederacy, was burned. The war was continued for several years, but its close found Joshua master of Canaan. “And the land had rest from war.” PP 510.4 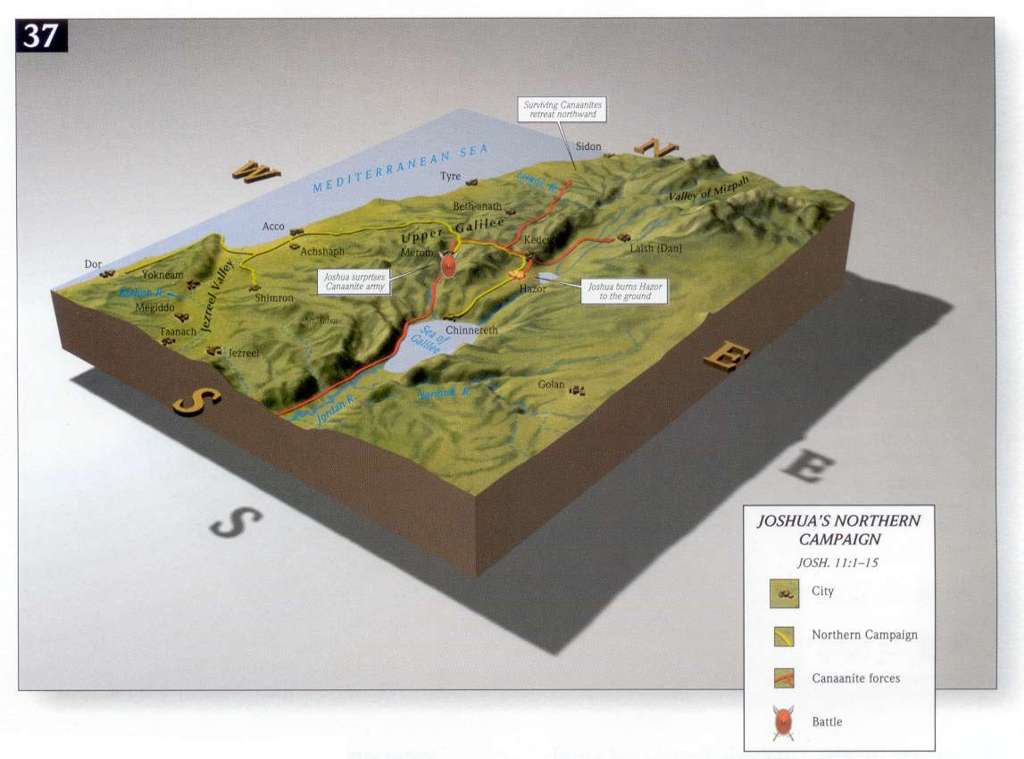