King James Version (KJV)
(Howbeit there came other boats from Tiberias nigh unto the place where they did eat bread, after that the Lord had given thanks:)
Adam Clarke
Bible Commentary

There came other boats - After Jesus and his disciples had departed.

From Tiberias - Herod Antipas built this city near the lake of Genesaret, in the best parts of Galilee, and called it Tiberias, in honor of Tiberius, the Roman emperor: see Jos. Ant. book xviii. chap. 2. sect. 3.

From Tiberias - This town stood on the western borders of the lake, not far from where the miracle had been performed. It was so called in honor of the Emperor Tiberius. It was built by Herod Antipas, and was made by him the capital of Galilee. The city afterward became a celebrated seat of Jewish learning. It is now called Tabaria, and is a considerable place. It is occupied chiefly by Turks, and is very hot and unhealthy. Mr. Fisk, an American missionary, was at Tiberius (Tabaria) in 1823. The old town is surrounded by a wall, but within it is very ruinous, and the plain for a mile or two south is strewed with ruins. The Jordan, where it issues from the lake, was so shallow that cattle and asses forded it easily. Mr. Fisk was shown a house called the house of Peter, which is used as the Greek Catholic church, and is the only church in the place. The number of Christian families is 30 or 40, all Greek Catholics. There were two sects of Jews, each of whom had a synagogue.

The Jewish population was estimated at about 1,000. On the 1st of January, 1837, Tiberius was destroyed by an earthquake. Dr. Thomson (The Land and the Book, vol. ii. pp. 76,77) says of this city: “Ever since the destruction of Jerusalem, it has been chiefly celebrated in connection with the Jews, and was for a long time the chief seat of rabbinical learning. It is still one of their four holy cities. Among the Christians it also early rose to distinction, and the old church, built upon the spot where our Lord gave his last charge to Peter, is a choice bit of ecclesiastical antiquity. The present city is situated on the shore, at the northeast corner of this small plain. The walls inclose an irregular parallelogram, about 100 rods from north to south, and in width not more than 40. They were strengthened by ten round towers on the west, five on the north, and eight on the south. There were also two or three towers along the shore to protect the city from attack by sea. Not much more than one-half of this small area is occupied by buildings of any kind, and the north end, which is a rocky hill, has nothing but the ruins of the old palace.

The earthquake of 1837 prostrated a large part of the walls, and they have not yet been repaired, and perhaps never will be. There is no town in Syria so utterly filthy as Tiberius, or so little to be desired as a residence. Being 600 feet below the level of the ocean, and overhung on the west by a high mountain, which effectually shuts off the Mediterranean breezes, it is fearfully hot in summer. The last time I was encamped at the Baths the thermometer stood at 100ø at midnight, and a steam went up from the surface of the lake as from some huge, smouldering volcano. Of course it swarms with all sorts of vermin. What can induce human beings to settle down in such a place? And yet some 2,000 of our race make it their chosen abode. They are chiefly Jews, attracted hither either to cleanse their leprous bodies in her baths, or to purify their unclean spirits by contact with her traditionary and ceremonial holiness.”

Was this helpful?
Matthew Henry
Concise Bible Commentary
Instead of answering the inquiry how he came there, Jesus blamed their asking. The utmost earnestness should be employed in seeking salvation, in the use of appointed means; yet it is to be sought only as the gift of the Son of man. Him the Father has sealed, proved to be God. He declared the Son of man to be the Son of God with power.
Was this helpful?
Ellen G. White
Christ's Object Lessons, 140

Christ's disciples were much impressed by His prayers and by His habit of communion with God. One day after a short absence from their Lord, they found Him absorbed in supplication. Seeming unconscious of their presence, He continued praying aloud. The hearts of the disciples were deeply moved. As He ceased praying, they exclaimed, “Lord, teach us to pray.” COL 140.1

In answer, Christ repeated the Lord's prayer, as He had given it in the sermon on the mount. Then in a parable He illustrated the lesson He desired to teach them. COL 140.2

“Which of you,” He said, “shall have a friend, and shall go unto him at midnight, and say unto him, Friend, lend me three loaves; for a friend of mine in his journey is come to me, and I have nothing to set before him? And he from within shall answer and say, Trouble me not; the door is now shut, and my children are with me in bed: I cannot rise and give thee. I say unto you, Though he will not rise and give him because he is his friend, yet because of his importunity he will rise and give him as many as he needeth.” COL 140.3

When Christ forbade the people to declare Him king, He knew that a turning point in His history was reached. Multitudes who desired to exalt Him to the throne today would turn from Him tomorrow. The disappointment of their selfish ambition would turn their love to hatred, and their praise to curses. Yet knowing this, He took no measures to avert the crisis. From the first He had held out to His followers no hope of earthly rewards. To one who came desiring to become His disciple He had said, “The foxes have holes, and the birds of the air have nests; but the Son of man hath not where to lay His head.” Matthew 8:20. If men could have had the world with Christ, multitudes would have proffered Him their allegiance; but such service He could not accept. Of those now connected with Him there were many who had been attracted by the hope of a worldly kingdom. These must be undeceived. The deep spiritual teaching in the miracle of the loaves had not been comprehended. This was to be made plain. And this new revelation would bring with it a closer test. DA 383.1

Read in context »
Was this helpful?
Ellen G. White
Counsels on Health, 370

These things God has been opening before me for many years. In our medical schools and institutions we need men who have a deeper knowledge of the Scriptures, men who have learned the lessons taught in the word of God, and who can teach these lessons to others, clearly and simply, just as Christ taught His disciples the knowledge that He deemed most essential. CH 370.1

If our medical missionary workers would follow the Great Physician's prescription for obtaining rest, a healing current of peace would flow through their souls. Here is the prescription: “Come unto Me, all ye that labor and are heavy-laden, and I will give you rest. Take My yoke upon you, and learn of Me; for I am meek and lowly in heart: and ye shall find rest unto your souls. For My yoke is easy, and My burden is light.” Matthew 11:28-30. CH 370.2

Christ had retired to a secluded place with His disciples, but this rare season of peaceful quietude was soon broken. The disciples thought they had retired where they would not be disturbed; but as soon as the multitude missed the divine Teacher, they inquired, “Where is He?” Some among them had noticed the direction in which Christ and His disciples had gone. Many went by land to meet them, while others followed in their boats across the water. The Passover was at hand, and, from far and near, bands of pilgrims on their way to Jerusalem gathered to see Jesus. Additions were made to their number, until there were assembled five thousand men besides women and children. Before Christ reached the shore, a multitude were waiting for Him. But He landed unobserved by them, and spent a little time apart with the disciples. DA 364.1

Read in context »
Was this helpful?
Ellen G. White
Fundamentals of Christian Education, 456-8

This sixth chapter of John contains the most precious and important lessons for all who are being educated in our schools. If they want that education that will endure through time and through eternity, let them bring the wonderful truths of this chapter into their practical life. The whole chapter is very instructive, but is only faintly understood. We urge students to take in these words of Christ, that they may understand their privileges. The Lord Jesus teaches us what He is to us, and what advantage it will be to us individually to eat His words, realizing that He himself is the great center of our life, “The words that I speak unto you,” He said, “they are spirit, and they are life.” FE 456.1

Having Christ in the heart, we have an eye single to the glory of God. We should strive to comprehend what it means to be in complete union with Christ, who is the propitiation for our sins, and for the sins of the whole world, our substitute and surety before the Lord God of heaven. Our life should be bound up in the life of Christ, we should draw constantly from Him, partaking of Him, the living bread that came down from heaven, drawing from a fountain ever fresh, ever giving forth its abundant treasures. When this is in truth the experience of the Christian, there is seen in his life a freshness, a simplicity, a humility, meekness, and lowliness of heart, that show all with whom he associates that he has been with Jesus, and learned of Him. FE 456.2

This experience gives every teacher the very qualifications that will make him a representative of Christ Jesus. The methods of Christ's teaching will, if followed, give a force and directness to his communications and to his prayers. His witness for Christ will not be a narrow, tame, lifeless testimony, but will be like ploughing up the field, quickening the conscience, opening the heart, and preparing it for the seeds of truth. FE 456.3

Read in context »
Was this helpful?
More Comments
Cross References
where
John 6:11
John 6:12
The Ministry of Jesus around the Sea of Galilee 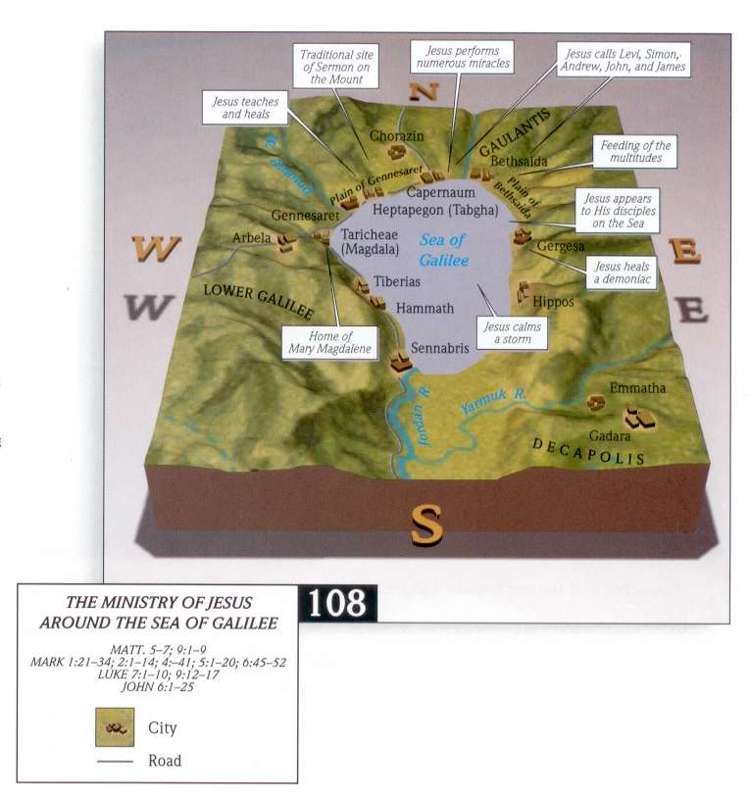