King James Version (KJV)
And the sons of Reuben; Hanoch, and Phallu, and Hezron, and Carmi.
Albert Barnes
Notes on the Whole Bible
Verses 1-34

- Jacob Goes Down to Egypt

The second dream of Joseph is now to receive its fulfillment. His father is to bow down before him. His mother is dead. It is probable that also Leah is deceased. The figure, by which the dream shadows forth the reality, is fulfilled, when the spirit of it receives its accomplishment.

Jacob arriving at Beer-sheba is encouraged by a revelation from God. Beer-sheba may be regarded as the fourth scene of Abraham‘s abode in the land of promise. “Offered sacrifices.” He had gathered from the words of the Lord to Abraham Genesis 15:13, and the way in which the dreams of Joseph were realized in the events of Providence, that his family were to descend into Egypt. He felt therefore, that in taking this step he was obeying the will of Heaven. Hence, he approaches God in sacrifices at an old abode of Abraham and Isaac, before he crosses the border to pass into Egypt. On this solemn occasion God appears to him in the visions of the night. He designates himself EL the Mighty, and the God of his father. The former name cheers him with the thought of an all-sufficient Protector. The latter identifies the speaker with the God of his father, and therefore, with the God of eternity, of creation, and of covenant. “Fear not to go down into Mizraim.” This implies both that it was the will of God that he should go down to Egypt, and that he would be protected there. “A great nation.”

Jacob had now a numerous family, of whom no longer one was selected, but all were included in the chosen seed. He had received the special blessing and injunction to be fruitful and multiply Genesis 28:3; Genesis 35:11. The chosen family is to be the beginning of the chosen nation. “I will go down with thee.” The “I” is here emphatic, as it is also in the assurance that he will bring him up in the fullness of time from Egypt. If Israel in the process of growth from a family to a nation had remained among the Kenaanites, he would have been amalgamated with the nation by intermarriage, and conformed to its vices. By his removal to Egypt he is kept apart from the demoralizing influence of a nation, whose iniquity became so great as to demand a judicial extirpation Genesis 15:16. He is also kept from sinking into an Egyptian by the fact that a shepherd, as he was, is an abomination to Egypt; by his location in the comparatively high land of Goshen, which is a border land, not naturally, but only politically, belonging to Egypt; and by the reduction of his race to a body of serfs, with whom that nation would not condescend to intermingle. “Joseph shall put his hand upon thine eyes.” His long-lost son shall be present to perform the last offices to him when deceased.

The descent into Egypt is now described. “His daughters, and his sons‘ daughters.” In the following list only one daughter of Jacob is mentioned, Dinah, and only one son‘s daughter, Serah. It is possible, but not probable, that there were more daughters than these at the time in his family. But even if there were no others, the plural is adopted in order to correspond with the general form of classification, from which the one daughter and the one granddaughter are merely accidental deviations. The same principle applies to the sons of Dan Genesis 46:23, and to other instances in Scripture 1 Chronicles 2:8, 1 Chronicles 2:42.

The list given here of the family of Jacob as it came down into Egypt is not to be identified with a list of their descendants two hundred and fifty years after, contained in Genesis 46:7 distinguished from sons‘ sons and other descendants.

“Jacob and his sons.” From this expression we perceive the progenitor is to be included with the sons among those who descended to Egypt. This also is historically exact. For the sake of clearness it is proper here to state the approximate ages of these heads of Israel at the time of the descent. Jacob himself was 130 years of age Genesis 47:9. Joseph was in his thirtieth year when he stood before Pharaoh to interpret his dreams and receive his commission as governor-general of Egypt, Genesis 41:46. At the end of the second year of the famine nine full years were added to his life. He was therefore, we may suppose, 39 years old when Jacob arrived in Egypt, and born when his father was 91. As we conceive that he was born in the fifteenth year of Jacob‘s sojourn in Padan-aram, and Reuben in the eighth, we infer that Reuben was at the time of the descent into Egypt seven years older than Joseph, or 46, Simon 45, Levi 44, Judah 43, Dan about 43, Naphtali about 42, Gad about 42, Asher about 41, Issakar about 41, Zebulun about 40, Dinah about 39, Benjamin about 26. “Jacob‘s first-born Reuben.” This refers to the order of nature, without implying that the rights of first-birth were to be secured to Reuben 1 Chronicles 5:1-2.

The sons of Leah and their descendants are here enumerated. Reuben has four sons, who appear without variation in the other two lists Numbers 26:5-6; 1 Chronicles 5:3. Of the six sons of Simon, Ohad appears in the other lists, and Nemuel and Zerah appear as colloquial variations of Jemuel and Zohar. Such diversities in oral language are usual to this day in the East and elsewhere. “Son of a Kenaanitess.” This implies that intermarriage with the Kenaanites was the exception to the rule in the family of Jacob. Wives might have been obtained from Hebrew, Aramaic, or at all events Shemite tribes who were living in their vicinity. The three sons of Levi are common to all the lists, with the slight variation of Gershom for Gershon. The sons of Judah are also unvaried. We are here reminded that Er and Onon died in the land of Kenaan Genesis 46:12, and of course did not come down into Egypt. The extraordinary circumstances of Judah‘s family are recorded in Genesis 46:16-18

Next are enumerated the sons of Zilpah, Leah‘s handmaid. The seven sons of Gad recur in Genesis 46:19-22

The sons of Rachel. It is remarkable that she alone is called the wife of Jacob, because she was the wife of his choice. Yet the children of the beloved, we perceive, are not placed before those of the less loved Deuteronomy 21:15-16. Joseph‘s two sons are the same in all lists. Of the ten sons of Benjamin only five appear in Numbers Numbers 26:38-41, Bela and Ashbel being the same, and Ahiram, Shupham, and Hupham, being variants of Ehi, Muppim, and Huppim. In two hundred and fifty years the other five have become extinct. Naaman and Ard seem to have died early, as two sons of Bela, named after them, take their places as heads of families or clans. In Chronicles 1 Chronicles 7:6-12 we have two lists of his descendants which do not seem to be primary, as they do not agree with either of the former lists, or with one another, though some of the names recur. The descendants of Rachel are fourteen - two sons and twelve grandsons.

All the souls that went with Jacob into Egypt, “that came out of his loins,” were eleven sons, one daughter, fifty grandchildren, and four great-grandsons; in all, sixty-six. Jacob, Joseph and his two sons, are four; and thus, all the souls belonging to the family of Jacob which went into Egypt were seventy. This account, with its somewhat intricate details, is expressed with remarkable brevity and simplicity.

The Septuagint gives seventy-five as the sum-total, which is made out by inserting Makir the son, and Gilead the grandson of Menasseh, Shuthelah and Tahan, sons, and Edom or Eran, a grandson of Ephraim Deuteronomy 32:8. This curious sentence may have an immediate reference to the providential distribution of the human family over the habitable parts of the earth, according to the number of his church, and of his dispensation of grace; but at all events it conveys the great and obvious principle that all things whatsoever in the affairs of men are antecedently adapted with the most perfect exactitude to the benign reign of grace already realized in the children of God, and yet to be extended to all the sons and daughters of Adam.

The settlement in Goshen is now narrated. “Judah he sent before him.” We have already seen why the three older sons of Jacob were disqualified for taking the lead in important matters relating to the family. “To lead the way before him into Goshen” - to get the requisite directions from Joseph, and then conduct the immigrants to their destined resting-place. “And went up.” Egypt was the valley of the Nile, and therefore, a low country. Goshen was comparatively high, and therefore, at some distance from the Nile and the sea. “And he appeared unto him.” A phrase usually applied to the appearance of God to men, and intended to intimate the unexpectedness of the sight, which now came before the eyes of Jacob. “I will go up.” In a courtly sense, to approach the residence of the sovereign is to go up. Joseph intends to make the “occupation” of his kindred a prominent part of his communication to Pharaoh, in order to secure their settlement in Goshen. This he considers desirable, on two grounds: first, because Goshen was best suited for pasture; and secondly, because the chosen family would thus be comparatively isolated from Egyptian society.

The two nations were in some important respects mutually repulsive. The idolatrous and superstitious customs of the Egyptians were abhorrent to a worshipper of the true God; and “every shepherd was the abomination of Egypt.” The expression here employed is very strong, and rises even to a religious aversion. Herodotus makes the cowherds the third of the seven classes into which the Egyptians were divided (Herodotus ii. 164). Others include them in the lowest class of the community. This, however, is not sufficient to account for the national antipathy. About seventeen or eighteen centuries before the Christian era it is probable that the Hyksos, or shepherd kings, were masters of the southern part of the country, while a native dynasty still prevailed in lower Egypt. The religion of these shepherd intruders was different from that of the Egyptians which they treated with disrespect. They were addicted to the barbarities which are usually incident to a foreign rule. It is not surprising, therefore, that the shepherd became the abomination of Egypt.

Was this helpful?
Matthew Henry
Concise Bible Commentary
We have here a particular account of Jacob's family. Though the fulfilling of promises is always sure, yet it is often slow. It was now 215 years since God had promised Abraham to make of him a great nation, ch. 12:2; yet that branch of his seed, to which the promise was made sure, had only increased to seventy, of whom this particular account is kept, to show the power of God in making these seventy become a vast multitude.
Was this helpful?
SDA Bible Commentary (limited)
Volume 1-7

9. The sons of Reuben. Of the four sons of Reuben, the last two mentioned must have been mere babes in the arms of their mother, since Reuben had had only two sons at the time of his first return from Egypt (ch. 42:37). Their names mean: Hanoch (a variant of “Enoch”), the name also of Cain’s first-born (ch. 4:17), and of the patriarch Enoch (ch. 5:19), means “dedicated”; Phallu, “separated”; Hezron, “enclosure”; and Carmi, “vinedresser” or “my vineyard.”

Was this helpful?
More Comments
The Journeys of Joseph 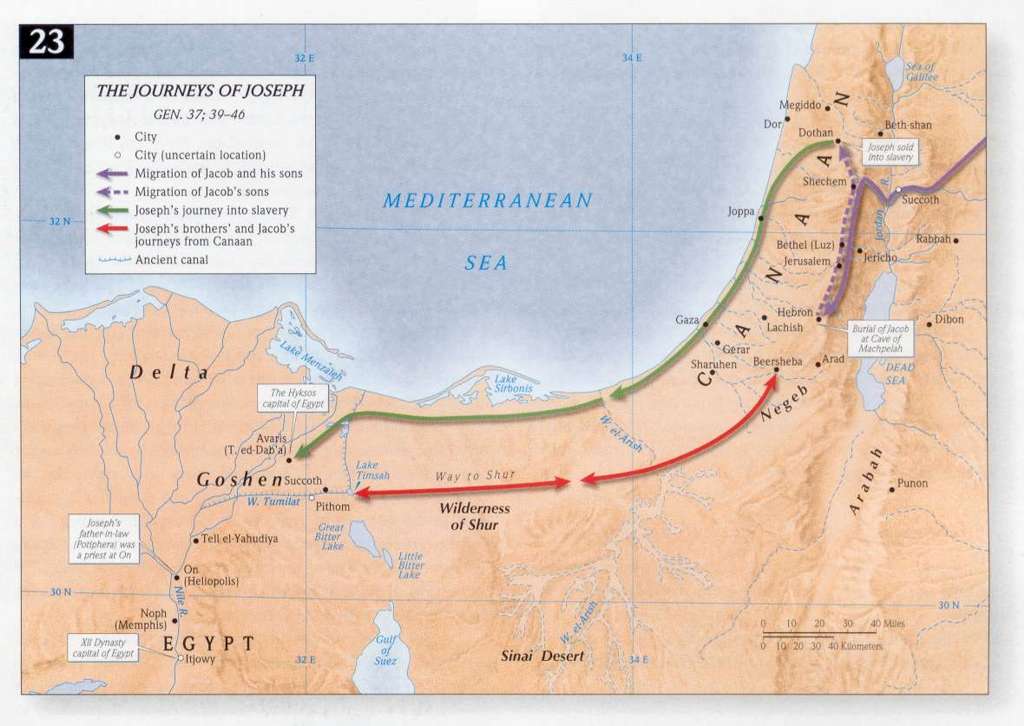